What Is An F1 Labradoodle? Everything You Need To Know

The Labradoodle has continued to gain popularity in homes around the globe. These dogs are a mix of a Labrador Retriever and a Poodle, and combine the best of both breeds: obedience, friendliness, and an easy-to-manage coat.

‍What is an F1 Labradoodle?

They’re medium to large in size, and are great dogs for families. Their curly or wavy coat gives them a cuddly appearance that appeals to a wide range of dog owners.

What is an F1b Labradoodle?

An F1b Labradoodle is a second-generation and is bred by crossing an F1 Labradoodle with a poodle. This means that the F1b Labradoodle is 75 percent poodle and 25 percent Lab. These Labradoodles will usually have more poodle-like characteristics, including a curlier coat, but will still exhibit Lab-like personality traits as well.

When did Labradoodles become popular?

The Labradoodle may have been around as early as the 1950s, though they didn’t gain much popularity back then. These dogs sometimes appeared in movies and TV shows, though they weren’t widely popular for the everyday household.

In 1989, a man in Australia starting breeding Labradoodles, and while he takes credit for their creation and popularity, it’s widely disputed that they were around much before that time. But only in the last couple of decades has the popularity of the Labradoodle skyrocketed, combining two of the most popular dog breeds around the world.

So why are Labradoodles so popular? While Labradoodles and Labs have many of the same characteristics and care requirements, let’s take a look at how these breeds differ.

Any Labrador owner knows that the double coat (required to keep the Lab warm and dry in all kinds of weather conditions) can cause a lot of unwanted shedding around the home, built up in the carpet, on the floor, and all over furniture.

For more on the Lab's double coat, see our article: Understanding the Lab's Double Coat: Do Labs Shed A Lot?

RELATED: Labrador Shedding: 3 Must Have Items to Conquer It

However, their coats can vary. You’ll see Labradoodles with the standard curly poodle coat, a more wiry appearance, or sometimes even straight. These are referred to as wool, fleece, or hair types of coats. But however curly it is, Labradoodles do inherit longer hair from the poodle.

Full-bred Labs are known for their friendly disposition,making them popular with children and families. Full-bred poodles are alsogenerally considered lovable, though they’re not always as outgoing as Labs,and may be more timid with new people.

Labradoodles inherit lots of that Labrador charm, so they’re thought to be just as great with children, and they make great companions. Both dog breeds are smart, but since Labs are working dogs, they have more of a tendency toward the hunt, making them more perceptive and committed to a task.

Because there are different sizes of poodles, including the standard, toy, and miniature poodle, the size of Labradoodles can also vary widely.

If a standard poodle is bred with a Lab, these Labradoodles are typically around the size of a regular Labrador any may even be a bit smaller.

Labradoodles are usually just as energetic as the Lab. Both breeds need plenty of exercise each day, in addition to opportunities to use their intellect, including games and other forms of stimulation. Because Labs are more prone to weight gain, they may need a bit more exercise to stay healthy and trim.

Labradoodles require regular grooming, just like Labs or poodles. This includes trimming, brushing, and washing. Brushing their coat regularly, every week or every two weeks, ensures that the amount your dog does shed is kept to a minimum.

Labradoodles typically get their coats trimmed a couple times per year. You should also trim their nails and bath them as needed. Of course, if your Labradoodle plays outside a lot and gets messy, they’ll need more grooming.

Some dog owners just prefer the look of a Labradoodle to a Labrador. You get that dependable, friendly personality of a Lab with the fuzzy, cuddly coat of a poodle.

Their size is manageable for a range of dwelling types, and grooming isn’t over the top.

All of these reasons have made Labradoodles one of the most popular breeds to own around the world.

Dog Training With PetSmart: Are Their Classes Worth It? (Honest Review) 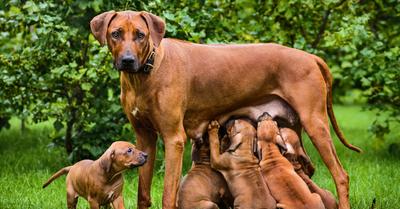 Best Dogs For Breeding And Selling

How Long Do Labradors Live? Tips To Help Prolong Life

Yard Size For Labradors: This Is How Big Yours Should Be